Applejack 13 is the single most unlucky changeling still alive.  Nopony can say exactly which god she angered to earn their eternal ire, but if there is something bad happening that is just short of lethal, you can be sure that 13 is somewhere in the vicinity.

She was first introduced when a pillar fell on her, trapping her for several days but not managing to kill her. She was freed when Applejack found her, and then helped her out.

It turns out, this is a common occurrence. The unluckiest changeling was weak, slow and pitiful and could barely could take two steps without being nearly killed most days, and it never got better.

When Chitania arrived in Canterlot and pried open the ceiling to the rec-room it was unlucky changeling 13 that was pushed forwards to speak to her. End result was that she was very nearly crushed. If Chrysalis had not gotten there in time and pulled her free, it would be likely she would be a splatter.

In the wake of it, 13 became enamored with Chrysalis, following her around and wanting to thank her for giving up such a surprise attack to save her. Chrysalis, wishing to avoid any others like 32, manipulated her with words and a single hairpin that cost half of a bit, ensuring her now and future loyalty.

She too was one of the ones on that flying deathtrap. Getting into crazy mishaps with the rides, hanging out with 55 and others, and screaming for her life when it looked like it was going to drop.

She was one of those sent out by Chrysalis to find the Elements and get them out of there if it looked like they were going to be infected, via a teleportation stone. Unfortunately her luck acted up again, and she tripped, sending an infected creature to where the wounded 42, 7, 41 and Sucker Punch were.

After that, she left the hive, and was found by Chrysalis on the edge of Canterlot's cliff, ready to jump out of shame for her failure. To her surprise, Chrysalis embraced her, and welcomed her back no matter how little she felt she deserved it.

She went with the others as they went to the Crystal Empire.

The Revenge of Variolus! Edit

But it was in this arc that her greatest secret was finally revealed. It turns out, this unlucky changeling all along had been none other that Chitania's daughter! She had fled her mother after a confrontation that had ended with herself being struck, and hidden out into the world before being picked up by Chrysalis. When Variolus attacked the Empire, she was finally forced to reveal not only herself to call her Mother to come face the other Titan, but another secret she had long held. For, unlike her mother, she was weak, her body barely able to sustain her let alone fight, sickly often and utterly incapable of ever achieving the Titan form... but she had a secret strength. In arc, it was revealed she possessed mind-magics unrivaled by any other drone, on par with even that of a Queen. The total opposite of her mother.

After Chitania was nearly killed in the final confrontation, she revealed herself to save her, using her mental powers to force Sunset's demon form into submission, and put her into a coma. Initially, it appeared that despite her mother coming to save her, she would not go back to her, and instead stay with the Hive. But upon hearing Chitania beg, and plead for her to give her another chance, eventually the long thought forgotten connection rekindled, and at long last mother and daughter were reunited, the whole Empire witness as Chitania gave in and cried.

She was the only changeling born to Chitania, that she was unable to produce a whole hive was an unheard of event that showed that Chitania was "Defective" as a Queen. In addition, no matter how hard Chitania tried, she could not make the child strong. She was forever weak, and pitiful. As such, Chitania hid her identity away from all the other Queens, all but Chrysalis's mother, her favored sister.

She was, despite all this, a caring mother who was firm and took no nonsense, as such when 13 repeatedly pleaded with her to remain Queen, Chitania had none of it. She remained staunch that one day her daughter would succeed her, no matter how little she wanted it. This was the source of a much strife and argument between the two.

After her mother finished a training session in a valley filled with giant monsters, the subject of ascension came up again, but this time was different. This time, 13 finally found the courage to push on, declaring at last that she would never take over for her mother, and that no matter how she wished it she would never be as powerful as Chitania.

Chitania, feeling as if her more gentle and nurturing parenting methods had failed, turned to a different source. The hellish training under her own mother. Doing what her mother would have done in that situation, Chitania struck her, insulted her, and declared that the kid gloves were off, and her own nightmare of training would begin shortly. Broken from a single blow, 13 had to be helped back to the Hive, and both went to sleep.

In the night, as her mother tossed and turned in regret, 13 spirited away to the edge of that valley. Down below were hundreds of monsters, and even her mother had never lasted a full two hours before being forced to call it quits. Still, she wasn't ready to jump just yet...

That's when another Queen emerged, and not her mother. Chrysalis's mother, Aurelia, confronted the child, asking her if she planned to jump. When she revealed she did, she did not stop her. In fact, she goaded her on, until she finally went through with it, never knowing that Aurelia had intended for this to happen to ensure the weakness of that child never replaced the Titan guardian they needed. What she also didn't know what that another Queen was watching the whole thing...

When she left, Queen Variolus ordered a drone to follow her, and watch her die.

She hid when her mother arrived, hid as she fought well on into the night in search for her, but never found her. Soon, she was all alone with Variolus's drone, who had been ordered to only watch, not attack. It too died eventually, leaving her to wander the world for years.

Until, one day, starving of love and about to finally die in a river, she was found by none other that Chrysalis herself. She was healed, added to the hive, and the rest was history. 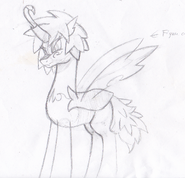 If she had ever ascended, things would probably get worse. 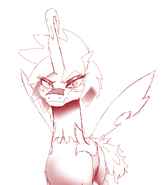 In another world, she is Queen.
Add a photo to this gallery
Retrieved from "https://princess-aj.fandom.com/wiki/Applejack_13?oldid=6939"
Community content is available under CC-BY-SA unless otherwise noted.