Start a Wiki
Applejack 42 is the roughest toughest changeling of them all, at least ostensibly.  After mercilessly beating manticores, Shining Armor, a large number of beasts in a fighting tournament, Shining Armor, a robot army, and Shining Armor, she's considered to be an expert at unarmed combat.  Her claims to fame are a membership with the Gun Club, a soft spot for her most frequent punching bag, and a helmet made of other helmets.

Her first appearance was only in mentioning. In order to test the might of the Changelings against her army, Applejack pitted 100 of her soldiers against a mere five Changelings. The Changelings curbstomped them. Or rather, the 'scrappy' one known as 42 did most of the curb stomping against her inept forces. In annoyance, Celestia had them pitted against a manticore, hoping they would be sufficiently maimed. While four of them were injured, but later revealed not killed, 42 once again stood victorious.

So, naturally, Celestia and Applejack got the bright idea to start putting 'him' in a pit fight against wild creatures and soldiers and taking bets. They made a killing, metaphorically.

And then 'he' escaped. Whoops.

In a hasty moment, Chrysalis sent the changeling that would later be known as Applejack 2 off to go find 'him', and to everyone's surprise... it worked! 'He' was found, and not only that, could talk perfectly normal too. 'He' was just worried that Applejack or Celestia would try to make 'him' fight 'his' kin. Feeling sorry that she put 42 through that, Applejack endeavored to treat 42 with more respect, and kindness.

This was put to the test when, in a vulnerable moment, Applejack discovered 'he', was not in fact, a 'he', but disguising herself to be a male. Due to the process of Changeling Ascension, there is only ever supposed to be a single female

in the hive, the daughter of the current Queen, and all others were to be 'dealt with'. Seeing as Chrysalis is still quite childless, this did not bode well for 42's future. But Applejack assured her, no matter what, that she would not let Chrysalis try to harm her.

Turns out, she didn't need to worry so much. Chrysalis either does not know or does not care about that rule. Thus, 42 could stop hiding her gender.

In a desperate attempt to gain Alicornhood, Shining Armor bet Celestia that if he could defeat 42 in combat, she would give him some wings. Sarcastically, she 'agreed'. Things did not go well from there.

In an effort to be 'fair', or rather because he mostly forgot, Shining Armor claimed he would not use his Anti-Changeling shield and fight purely on physical capabilities. Needless to say, Shining Armor's years of inactivity had not been kind. He found himself on the end of a hoof to the face beatdown more often than not. Or rather, pretty much always. Against someone who had spent their entire life pretty much in combat, Shining Armor felt the backstrike of his laziness. And yet, he was starting to walk away from those fights with a little more than bruises...

In one surprising act, after she had 'infiltrated' the Crystal Empire to find information and found herself feeling depressed at how openly accepted Two was in comparison to her, Shining Armor actually sought out his sparring partner, and gave her a peace offering in the form of a plate of waffles. This was just the start of something, but at the time she had no idea what it was.

Moving to the EmpireEdit

When her Queen decided she rather liked pestering Shining Armor at the behest of Celestia, she ended up spending more and more time over in that Empire, and less with her hive. Eventually, 42 decided to spend some time unofficially helping to train the Crystal Guard. And spending time with Shining Armor. And also Cadence. And 18. Mostly, she just ended up spending time with what was quickly becoming her tight circle of friends.

Sometime after Spike was injured and Blueblood's intention was made clear, the deposed prince sent another robot to try an attack. Only this time, it was pointed squarely at the Crystal Empire. While Shining Armor managed to defeat it, he was injured in the process. This made her a touch... paranoid. Despite this, no more one off attacks like this occurred again.

Later, she was the only one to find why. Her Queen had been secretly destroying any attempts, and there had been plenty, by using a combination of stolen tech from Twilight, and her own secret technique she had stolen from a relative. She was sworn to secrecy, and kept this secret permanently after that.

When Twilight asked her to join in the A-team on a direct assault on Blueblood's forces, she was torn. On the one hand, this would be dealing with a threat to her Queen and her hive. On the other, this would be leaving her Queen and the Crystal Empire without someone of her fighting capabilities to assist in repelling the counterattack Blueblood was sure to send. In desperation, she sought out a capable fighter from her hive, and transferred enough of her memories to him in order to him to make the con. He would take her place fighting Blueblood, and she could remain with her Queen.

A wise choice, as it turns out, as Blueblood sent the bulk of his forces to the Empire.

Against the horde, she stood with the soldiers and Shining Armor, fighting against an insurmountable force with everything she had. In the end, they found they just could not match their numbers, and had to retreat behind the shield. It seemed dire, and hopeless.

But Chrysalis had come up with a way to win, she said. She claimed a technique passed down to her could wipe them all out in a moment, but it required both Shining Armor and 42 present. Reluctantly, they left their post. But it was a trap! Chrysalis locked them both in a vault, along with Two and Sombra, and used this opening to enact her real plot, to drain the Crystal Heart.

When the smoke cleared and Chrysalis was being dragged back to the Empire after nearly dying from the burnout of too much love, 42 was quick to forgive her, and all stood together as 2 restored the Crystal Heart. As one they were together... a family.

Her first formal function was quite memorable. Between group dancing, enjoying watching Spike make a fool of himself, and of course a heart-shatteringly warm moment with Shining Armor asking her to dance, she had quite the fun time.

She also got drunk off her ass, beat the hell out of the security, and shoved Shining Armor through multiple walls, and a ceiling.

And then she got consumed by a giant rolling marchmalley ball.

All in all, she had fun.

In hindsight, she should not have taken "You can't use the portal, even with your love-harness" as a challenge. She ended up shorting the portal out, stranding Chrysalis, Cadence and Shining Armor in the Crystal Empire. This would normally already be a problem, as it kept them from the formal function, but this compounded just a bit when a giant monster Changeling started stomping towards Canterlot. So, naturally, she and the other A-team Members hopped in Highwind, and charged out to meet the beast head on, firing everything they had!

And then their airship got crushed like a tin can. Needless to say, she was unhelpful after that, and was eventually teleported to safety with the rest of Canterlot.

Following Twilight's breakdown, thinking that Science was more destructive than helpful, she was one of the ones who tried to convince Chrysalis to help repair her mind, and one of those most devastated when she revealed she was waiting on an agreement with Spike to pay off. Her opinion flipped when it was revealed Chrysalis's fears were justified, and that they were hiding information on her. Though she was hurt by Spike's actions, she did her best to move past them for the good of the team.

However, there was a much more lasting impact from this event. During the end, when it looked like a war was to break out between Chrysalis and the rest, Cadence stepped forward and put an end to it. It was during this talk that the princess revealed that one of the things that would hurt her the most from casting Chrysalis out was the fact Chrysalis might try to take 42 with her, and she would miss her so because of it.

She's trying, emphasis on try, to enjoy Partyland while her dueling emotions for both Shining Armor and Cadence are bubbling to the surface, to the point where she has begun arguining with her own brain on the matter. Needless to say, she's not the most stable right now. But hey, she's trying to have some fun...

Loyalty is hard to come by, which is why it's all the more important that 42 is Chrysalis's number one changeling. Essentially an unofficial second in command, 42 is dedicated to making sure Chrysalis's every demand is met and her Queen, and by extention her hive, is safe. Her moments of doubt are all too brief, and her loyalty remains... even when her Queen forgets that she already was in a pit fight three times already, but hey, what's one more battle to the death between Queen and Subject?

Between the constant beatings and lack of respect, you'd think these two would be the most bitter of adversaries. And, perhaps if that had continued, they would still be. But a surprising show of faith on Shining Armor's part slowly gave way to a much closer relationship. Eventually, he came to appreciate the results her 'training' was giving him, and she came to appreciate that maybe there was a little more to fighting. Soon, they became friends. Now, she's training his army, guarding his castle and TOTALLY NOT CRUSHING ON HIM BECAUSE THAT WOULD BE SILLYAAHAHAHAHAHASHUTUP!

She's found quite the friend with the little dragon. Helping to form the Gun Club, fighting with him as part of the A-team, and beating some technique into him besides, she's more than happy to help out and lend a hoof when a fight needs fighting, and he's happy to have her. There's only one thing that could make her turn on the dragon, but thankfully her Queen has no need for them to fight... for now.

Likely her best friend, her fellow Changeling may supply her own endless bitching about the world around her, but she's also more than happy to listen and offer advice as well. If 42 needs some sanity in her life, 18 is the first one she will call. Which is good, because if she had to deal with Chrysalis's demands all by herself, she would likely snap and burn the Empire to the ground in about a week, non-flamability of crystal be damned.

While not strictly loyal to the Princess, she does have more than a healthy dose of respect for the mare, and is quite open to helping her out and going to her if she requires assistance. Just like the rest of Equestria at this point, actually.

42 is under no delusions that her current, much more favorable life in the Empire with all of her friends and Queen hinged on Cadence not demanding to Shining Armor they be thrown out. She's well aware that if the Princess, who had ever reason to hate her, had given the word, they would have been hurled into the snow in record time. Which is why it was all the more surprising when, instead, she gave her a chance. Her Queen will always have her loyalty, but perhaps sharing is caring... 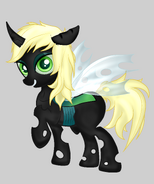 You know how changelings are all decptive? Well, uh... let's just say that hoof being up isn't for shakes. Hope you like punches!
Add a photo to this gallery
Retrieved from "https://princess-aj.fandom.com/wiki/Applejack_42?oldid=6472"
Community content is available under CC-BY-SA unless otherwise noted.