Formerly known only as "Tickles", she is the last of a hive of Changelings who's special ability was to grow spider-legs, among other more horrifying things. As the daughter of the now dead Queen, Sciderella, she strives to be every bit the brutal cannibal her mother was. And fails horribly at it.

Her pastimes are making web based 'weaponry' that is in actuality just clothing, and writing down her knowledge on how to properly perform the horrible abilities her mother was so apt at in her handy notebook. Thus far, all she's figured out is how to tickle things.

The daughter of the cannibal Queen, Sciderella, the most terrifying Queen of them all, she was eager to prove she could be every bit the skin-peeling, pony dissolving, army enraging terror her mother could be!

She's not. She's horrifically incompetent at everything even remotely horror-worthy. Perhaps this is why Sciderella hid her away in the catacombs beneath Canterlot, conjuring mind control to the foul creatures within to protect her. But with 77 breaking his way out of the catacombs and into the castle, she now had a way to get up there and... well, tickle. Her sole target, Spike, eventually grew tired of being dragged away and tickled, so he set off on an expidition to find this mysterious creature and discover more about them! Spike, Rarity, Blueblood and their morlock guide Rekulk went down into those caves, not knowing she was well aware, and following them every step of the way.

She would occasionally make attempts to peel their skin off, or drop various "Bombs" or "Traps" in an attempt to capture the group. Said items proved to be fantastic clothing, and nothing else. Eventually, they managed to find her as she rested in her cavern, and learned of her backstory. Unwilling to leave the innocent soul behind, they resolved to take her topside with them. This went about as swimmingly as expected. Between the defender monsters attacking them, Chrysalis going bersek trying to kill her, and having to melt the bathroom to prevent any escapes, it was a fun day.

Now, she resides topside, being looked after by Spike, Rarity and Applejack, and wondering when her "Taker" Blueblood is going to return.

She has nothing but love for Momma Sciderella, even if said mother tended to eat pony, griffon, dragon and Changeling alike in slow and painful ways. She wants to be just like her, though thankfully for all involved she could not fail harder if she tried. Still, something compelled the mad Queen to protect her before she devolved into madness, maybe there was a reason after all...

Her favorite target for her "Attacks" in the leadup, he's currently looking after her and trying to keep her from doing something stupid. It's mostly working?

As her "Taker" and the one who insisted they bring her back, she has a high opinion of the stallion. Hopefully, whenever he gets out of prison, they can spend more time together.

Not Applicable, she's not allowed anywhere near them. Do they know why? No. But Chrysalis probably has her reasons... probably. 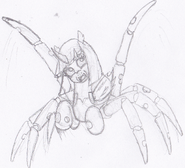 I'm telling you, those spider legs are so natrual. Totally not fake... really. 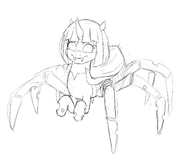 She just wants to tickle, promise.
Community content is available under CC-BY-SA unless otherwise noted.
Advertisement