Changeling 77 is a changeling with a troubled past and a heart of gold.  After surviving the horrors of the tunnels below Canterlot, his dedication to the hive as a merciless warrior only intensified.  The only thing that gives him pause is the knowledge that if he dies in service to his Queen, he may never get to see his lovely Ms. Cheerilee again...

Unlike the others, was NOT present during the naming, so he does not have Applejack in his name. His name came from a suggestion by 88. Originally, he was going to go with 7 because it is a lucky number, but she suggested he double it up.

[1] He thanks his "sister", Changeling #88, for coming along with him and Harry as backup. 88 asks why he needs hr when he has a bear on his side. Harry makes bear noises, but 77 claims 88 can't understand the bear. Following some accusatory bear noises, 77 then claims he's not lying. Moving on, 88 asks what happened and 77 says they have many questions, such as "why we had to stop and get coffee on the way to a crime scene." 88 says she wanted some so she could "punctuate the moment" and takes an audible *Sip*. Harry makes bear noises and she tells him to get his own coffee. 77 tells her to just put it down if they need to tackle someone since their magic won't be enough. This piques her interest, but he says it won't stay that way. At that moment, Berry Punch throws up, causing 88 and Harry to freak out. "Oh dear love it’s everywhere!" 77 maintains composure and declares Berry Punch "under arrest for starting a bar fight!" 88 makes a tired remark and punctuates it with another *Sip*. Berry claims that starting a fight doesn't sound like her, but remembers that someone punched her in the face. "Shit, I did start a fight." 88 calls it an "open and shut case" and takes another *Sip*, but 77 does a double-take and asks why someone punched her in the face. Berry thinks on it and remarks that it was pretty odd that since there didn't seem to be a reason. 88 tries to punctuate another cliche sentence, but runs out of coffee. Harry wants some, too, but she's not about to give him a freebie with no cash. 77's so glad she's helping out.

[2] Exasperated, Cheerilee tells Changeling #77 that Harry has been sitting in the corner for hours. After repeatedly asking what she did, Cheerilee admits she said "the B word". Disappointed she said that, 77 tries to convinve Harry that she's trying and that she's not a bigot. Harry, in bear gibberish, asks if she'll prove it by kissing him. 77 flatly rejects the idea, saying there are better ways to prove she's not a bigot, but Harry says something that sets him off and the two get into a tussle. Cheerilee shrugs, saying she's in the clear at least.

[3][OOCO] In another session of OnO with Diamond Tiara, Spike, and Changeling 42. It starts off with him asking confirmation of their goal to "defeat the coming pack of flaming wolves" by getting buckets and filling them with river water. They agree to that, with Diamond Tiara saying they'll start by going to a shopkeeper. Spike sets the scene with them going into the shop, but a guard asks them about the dead kennel and tavern owners. They all feign ignorance and Spike tells them to roll. Unfortunately for him, he rolls a 1 and is forced to have the guard drop the subject and leave. Moving on to the shopkeeper's wares, it turns out the buckets are 10 gold pieces each. 42 has 20g, DT has 30g, and 77 has 40g. 77 tries to barter for a lower price by saying they need them to defeat flaming wolves, but rolls below Spike's number check. 42 tries to back him up, saying the dog with them told them of the oncoming attack, but fails to number check as well. Annoyed by their supposed lies, the shopkeeper ups the price to 20g a piece. DT turns to threatening the shopkeeper and rolls, passing with a Natural 20 for Intimidation. The shopkeeper caves and tells them to take anything they want. 42 takes that literally and starts grabbing a bunch of potions. Spike's incredulous about them turning to robbery, but 42 says that the wording gives them a loophole to make it ok.

The two are broken brothers. 77 desperately wants 32 to give up his anger and move on from the tragedy they shared in the tunnels, but 32 will accept none of that and wants Chrysalis to pay for her "crimes" of neglect and see the changeling race determine their own future. Not long after 32's second incarceration, he renounced 77 as his brother, hurting both massively.

77 and Cheerilee met during the Gala arc and quickly hit it off. The pair seem magnetically drawn to one another due to their shared understanding of the horrors which lurk within shadows and the mutual comfort they bring to their scarred psyches.

Diamond Tiara first met 77 when she was attempting to spy on the changelings to find a weakness. 77 then appeared in her hotel room and stayed with her till dawn enlightening her on the actual fragility of changelings, terrifying yet apparently fascinating her. The two have a strange (second) father-daughter relationship and 77 affectionately calls her "Poppet".

How he remained loyal to Chrysalis throughout it all, even the Queen herself could not say. But he remains, as stalwart a servant as he ever was, and still devoted to his hive. That said, his loyalty is not a one way street. For all her faults, the Queen does care about him, and honestly regret the things she accidentally put him through. She is as concerned with his safety as he is with his hives, to the point where when he considered returning to the caves, she told him quite forcefully and in no uncertain terms she would not allow it. They have an odd relationship, but with the exception of 42 there's probably nobody she feels more concerned about.

He only needs one eye to see the horrors

One of them is chewing, the other is chewing OUT, know the difference, it could save your life 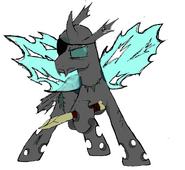 Whoa buddy, watch it with the knife! You'll put somebodies eye out.

His escape had it's own musical score. Just don't ask how he got it in a bathroom.
Add a photo to this gallery
Retrieved from "https://princess-aj.fandom.com/wiki/Changeling_77?oldid=6194"
Community content is available under CC-BY-SA unless otherwise noted.