Princess Fluttershy, um, that is... if that's alright with you.  Formerly a pegasus from Ponyville, she primarily cares about animals and her friends.  Unlike most alicorns, she is not ascended by Celestia or Luna, instead having gained her alicorn powers from Discord.  Said alicornification also may have scrambled something in her brain... or maybe that's one of the oodles of clones that have started cropping up.

She's small, she's cute, and she's on a mission! 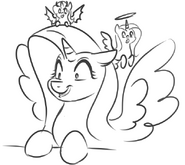 Those aren't figments of her imagination, they're clones this is not good!

NO CHAOS! NO! Also please don't turn us into toads-aw dang

When she said she wanted to be closer to the animals, this probably isn't what she meant.

What? She's just sleepy. Not everything needs to have a deeper meaning.

Is she listening? Bored? About to pounce on a piece of yarn? This pony is a mystery.

She's trying to explain that this is actually exactly what it looks like, those are just bars that say "censored' on them. 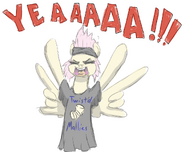 Her options for 'soft and loving rock' are limited, so she goes all in when she can.

That bunny may not be Angel, but she loves all things.

Everyone needs a little chaos in their life 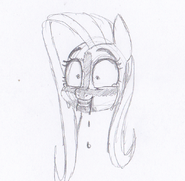 Too much! Too much! 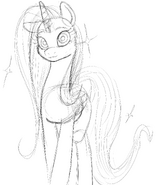 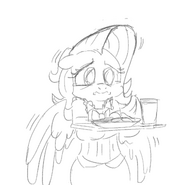 She just wanted some milk and cookies, but the universe won't let her.

Fluttershy needed to go undercover, and that kind of life... eats away at you.

Six years of chaos, and you never know what grows.

Who's going to tell her that came off her mark, and will she want to put it back?
Community content is available under CC-BY-SA unless otherwise noted.