Potatojack, or PJ for short, is a spud loving survivalist with a love for her pully system and an even bigger love for flying around on it. A member of the illustrious Gun Club, she spends most of her time training with Spike and crew.

The cloak makes her extra survivalish 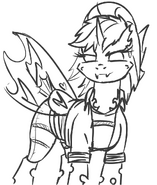 She's dressed for success in killing TItans! Only she's not very good at it.
Add a photo to this gallery
Retrieved from "https://princess-aj.fandom.com/wiki/Potatojack?oldid=5701"
Community content is available under CC-BY-SA unless otherwise noted.