The current-former-currently former Captain of the Wonderbolts who took the place of a sadly mismanaged orginization and tried to whip it back into shape with all her heart and soul and gave it her all!

Shes not the Captain anymore. 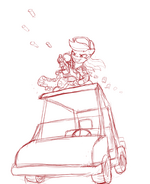 Wait a minute! Why isn't she flying? This is totally unrelistic.
Add a photo to this gallery
Retrieved from "https://princess-aj.fandom.com/wiki/Rainbow_Dash?oldid=6942"
Community content is available under CC-BY-SA unless otherwise noted.