Start a Wiki
Rarity, or Princess Rarity if you would please thank you very much, is an alicorn ascended to Princess status purely in an attempt to give Applejack something to really complain about.  After a brief Jabba-like stint of overindulging on the cakes at her disposal, ended when Spike delivered a regretful but painfully accurate assessment of her actions, she's slimmed back down to acceptable size and vies frequently for the heart of her favorite dragon.

She has refined and modified Spike's signature weapon 'Charity' with enchantments and crystals of her own making, making it more precise, deadly and able for her telepathically communicate with him at will.

[Q] "Look at all the gems I relieved those dimwitted canines of through the sheer cunning of my femininity, darlings! LOOK AT THEM! OHOHOHOOO!" 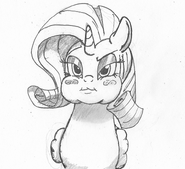 Just a little pudge, that's all!

She wanted to be a princess, but somehow this part got left out of the brocures.

Okay, so, the paperwork is technically done?

Move ponies, get out the way! Rarity is here with something to say! 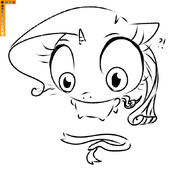 You ever find yourself suddenly horribly deformed? Who cares, dresses have to be made!

She's only borrowing it.

Is she flustered? Is she angry? She's something and Rarity is enjoying it.

Early in the story, princess life 'got to her' in a special way. This is the end result. 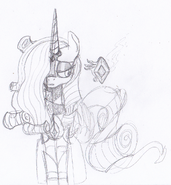 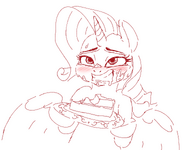 She is bad at eating cake.

Her fashion senses are tingling 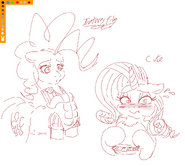 You don't eed to think it, Rartiy, everyone's thinking it

Of course her attack doubles as a show routine, of course it does.

Everyone's honestly just moer stunned she seems to be doing paperwork.
Add a photo to this gallery
Retrieved from "https://princess-aj.fandom.com/wiki/Rarity?oldid=7027"
Community content is available under CC-BY-SA unless otherwise noted.