Start a Wiki
A long long time ago, there was a Changeling Queen. This Queen was an anomaly.She was surprisingly helpful, spending most of her time saving or helping keep hidden the various other Queens. She fought monsters to protect them, she traveled miles to save them, and at her height she made the first steps in actually having a lasting peace between ponies and Changelings.

This is not that Queen. This is the one who screwed all that up.

Long before the start of the story, The Titan Queen, Chitania, had an unlikely meeting. The wife to the mayor of a tiny isolated town on the top of a snow covered mountain discovered her, but rather than fear or disgust instead showed compassion, and offered to let Chitania and her hive live with them in that desolate place. Though her reasons were entirely selfish, fully intending to backstab the town the moment they had enough love and take over Equestria, Chitania agreed. Still, as the months wore on and she spent her days defending the small town, she eventually came to wonder if perhaps this might work out after all.

And then Variolus showed up.

To Chitania's horror, Variolus had killed the mare she had come to see as a friend, and taken her place. But that wasn't all. Variolus had wanted to make sure that the con stuck, and had inadvertently stumbled across the find of a lifetime. In a moment of trust, Chitania had given the Mayor's wife a secret, a devastating one. She told her how the Titan Form magic worked.

Sure she had found the secret to ultimate power, Variolus decided to get rid of her competition, and challenged Chitania to a battle while ordering her hive to decimate the town. Chitania met her challenge, and ordered her own hive to defend the town. With her poison fangs, knowledge of Chitania's abilities and fighting style and now having the distinct advantage of the supersize magic, Variolus was sure she would easily crush Chitania and rule!

And then Chitania ripped her head clean off, and spat in her skull.

But perhaps Variolus did get the last laugh in that fight. Her hives similar look to Chitania's and the grief from their loss drove he town to adopt a "if it's a changeling, kill it" policy. In a single blast of magic prepared by the town mayor, every Changeling died, both Variolus's hive and Chitania's. Every one, except for Chitania, of course. She ended up destroying the town in her blind rage, leaving nothing to remain. This rage carried over to when Chrysalis's mother arrived, and in the battle that followed Chitania was defeated and sealed away in the ice of that mountain, unable to help the other Queens any longer, and unable to help stave off the decline of the Changeling race or make any more strides for recovery. In a sense, Variolus had done more damage than Chitania could.

Needless to say, she is not looked back on favorably in present times.

Sunset Shimmer, in modern day, began experimenting with changeling magic. While in such an experiment, something went terribly wrong. A dreamstone, an object that Sunset had planted in the ballroom long ago and that she now believed held the dreams of Chrysalis, had become infected with changeling magic. But more than that, while attempting a bit of fun, Discord accidentally imbued it with his chaos magic, and something strange happened. The stone struck her in the chest, destroying her heart in one shot, and replacing itself where it had been. Through this, Sunset gained access to the Hivemind.

Variolus, since her death, had been cruelly sealed off from the rest of the Hivemind, punishment for her crimes against their kind, doomed to forever be surrounded by the ultimate unison of changeling mind,and all of them hating her. At least, until Sunset arrived. When the pony left, she did not leave alone. Unique, thanks to being sealed away, Variolus was able to follow with her.

Sometime afterwards, while she was reeling from her bodies new state, Variolus revealed she had taken up residence in her mind and intended to cooperate with the unicorn. If Sunset enabled Variolus to speak with Applejack 32, her heir, and Chitania, she would allow her to contact the other Queens if she wanted and hand over the secret of the Titan magic as the only other one besides Chitania to know how it works. Desperate for knowledge, Sunset agreed.

What she didn't know was that Variolus had her own agenda. She knew that Chitania's daughter was still alive, and she needed to seek her out if her 'plan' was to succeed.

Over the course of a week, Variolus gained more and more power over Sunset's mind, moving from subtle coercion to fully taking over. To sustain herself in her new state, Sunset had to absorb love from others and thus flirted and knocked out several ponies.

The first confrontation, with 32, took place after Sunset lured him into the palace under the pretense of getting to know him better while in disguise. When it came to Variolus revealing herself and her agenda, 32 took flight, thoroughly sickened by being used by Queens. His mother was not amused, mindzotzed him to seek out Chitania's daughter so she could pinpoint her location and sent him on his way.

Thanks to the discovery that one of Chrysalis's Hive, 12, had been sent off to a secure location under the guise of helping Screwloose, all thanks to a mistake on Applejack's part, the Elements of Harmony and all of the A-team left to free the captive 12. Variolus chose that moment to completely take over Sunset's body while lulling the unicorn's mind to sleep. Sensing her son in the Crystal Empire, she crossed over, taking out the portal's guards on both sides.

After landing, Variolus placed several odd things all around the empire and when her preparations were done Variolus unleashed her Titan form, allowing Sunset to know and learn everything about it. How to use it, how it worked and what its strength and weaknesses were. For the next several hours, Variolus smashed, raged and trampled over everything in the Empire she could touch. All Sunset had was the hope that Variolus would adhere to her promise not to kill anyone. With this done, 13, now revealed to be Chitania's daughter, had her hoof forced, and she reluctantly called her mother. Variolus hijacked the call, and dared the Titan to meet her challenge or she would kill her daughter.

After several confrontations and battles, Chrysalis chose to take the field. Using Variolus split attention, she invaded the Queen's mind and intended to blast it into dysfunction. Variolus, desperate not to fail, shoved Sunset's mind in front of the anticipated attack.

Chrysalis was stunned into inaction, and surprisingly unwilling to just take Sunset's life, and thus ejected from Variolus mind. A second attack followed soon after, a ruse combined with a deadly lance of energy the Queen launched, chipping the Gem keeping the Queen alive. Infuriated, she launched a massive attack to obliterate the Queen, Cadance, Shining Armor and anyone between them. Luckily, they were able to shield before it struck.

Struck with the realization that there was no way this couldn't end with casualties and no longer caring for any powers or the Queen's plans, Sunset bound her own soul to a chaining spell, locking Variolus into her mind, unable to do anything as Chitania took the field and started ripping their body limb from limb.

Variolus tried pleading, explaining her plan, her motivations, that she truly did merely wish to give Chitania her daughter back, to fix the rift between her and Chrysalis, and to grant her forgiveness for the crimes she committed, but Sunset was unmoved. Finally, Variolus attacked the unicorn, intending to devour her soul and make them join into one. She almost succeeded, but that is when the corrupted Element of Magic, still stuck to Sunset's soul like a blemish lashed back and turned the tide. Queen Variolus was devoured, her soul sent into the afterlife never to return, leaving Sunset with all of the Queen's memories, abilities and even some of her personality.

Over the course of the next month, her memories would be removed from Sunset's head, and bound into an orb that now contains them. Any who hold the orb see her memories, all of them, and take on her personality. She lives on, in a way, even after she had long since been defeated.

And she's still messing everything up.

She's not one for labels... because she's awful. 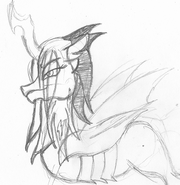 Without legs, so she can't run to wreck things as fast. 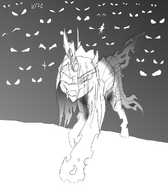 if only it was just a nightmare..
Add a photo to this gallery
Retrieved from "https://princess-aj.fandom.com/wiki/Variolus?oldid=6937"
Community content is available under CC-BY-SA unless otherwise noted.